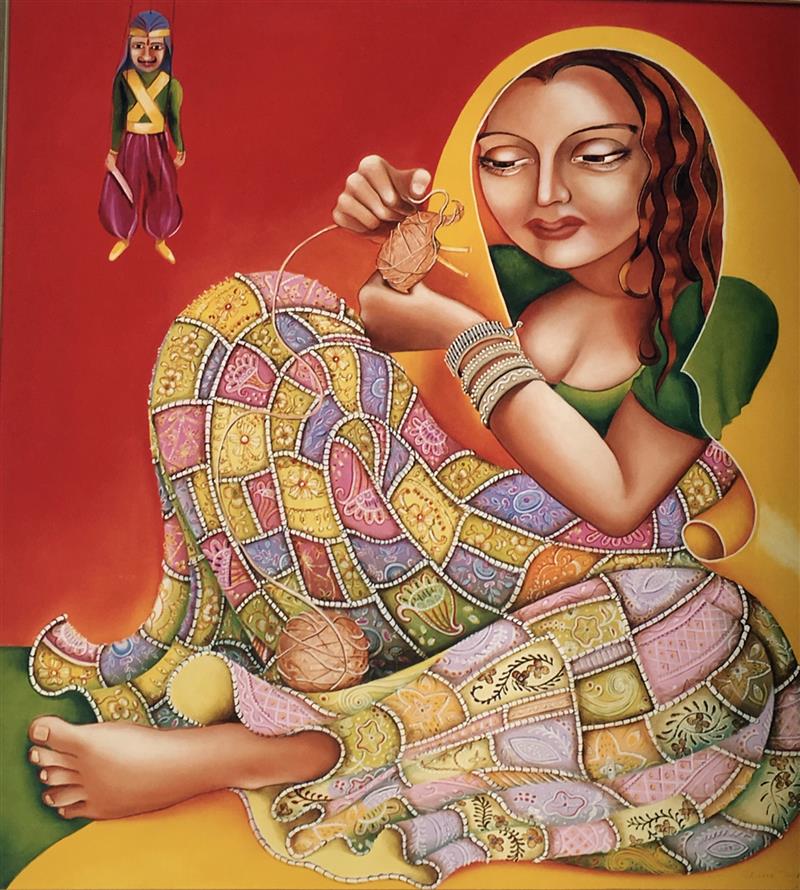 This painting has the traditional artists (Kalakar in Hindi) with whom I have worked for over 25 years as the subject.

My sister and I founded an NGO which was called Kalakar Trust. The Kalakar Trust, now renamed  “Kalakar Tarang”, works for the benefit of disadvantaged mostly traditional artists. The artists include musicians, singers, dancers, acrobats, magicians, puppeteers and crafts makers.

When we started our work I found that there were some crafts people in this community who made traditional toys and puppets. They made horses, elephants, and parrots. They also made small dolls of men, women and children, including kings and queens, courtesans and jokers.

When I observed the crafts people making these toys out of string, cloth and wood, I realised that they were making a small world populated with these beings. Not only did this community create a small world physically, they also created stories to illuminate the lives of its tiny actors. The story tellers moved their puppets using the threads that were attached to different body parts as they told their tales.

While trying to provide socio-economic and health support to these artists and crafts people, their storytelling often confused me. I found it hard to figure out whether they were just making up a story with their dolls and puppets or were also turning me into an actor in their story. The artists could blend reality and fantasy perfectly.

With reality, I mean the work that we were doing with the Kalakar Trust to support them. This included supporting the artists’ educational, health and socio-economic development. The artists had identified their own development needs as part of our initial entry into their community. We found that, at the time, they had little to no knowledge on many issues. This included on vital topics such as identifying illnesses such as TB and leprosy before they got worse, malnutrition or the dangers of the custom of child marriage! We worked to prepare the artists to make the most of the development opportunities that were available to them.

In the painting, you can see the woman concentrate completely on the work that she is doing.  When you observe her carefully, you can see that she has certain features that make her resemble a puppet herself. There is a reason for this depiction. The women in this community are very artistic but had no freedom to express themselves artistically. At the time, they were mostly only allowed to make these toys and puppets. Only the men had the freedom to do whatever they liked, such as performing using a wide range of musical instruments and engaging in other forms of artistic expression. The men took complete advantage of this freedom, while the women were caught in a strict box, also being treated like puppets in their own lives.

Notice that the woman’s dress has many stitches. It is patched with embroidery; this symbolises another fantasy world (embroidering stories). The embroidery shows lots of beautiful flowers and other nature symbols, which actually did not exist in the slum where they lived.

The entire painting is painted in a very smooth and untextured manner with no layering. The colours are those which are very commonly worn by the community.