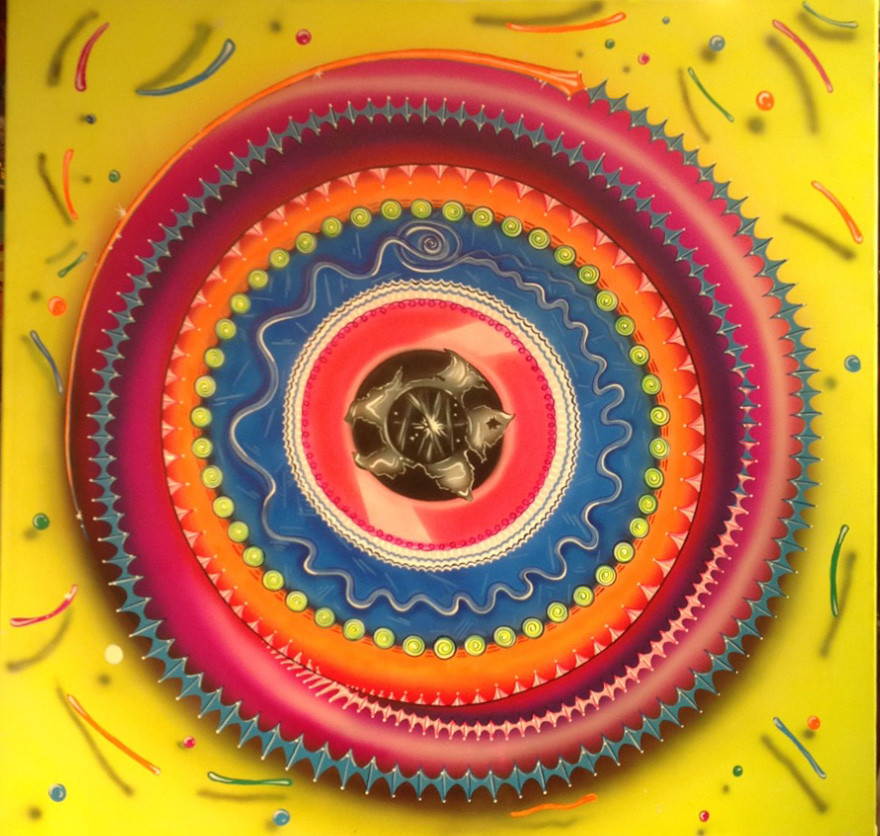 The inspiration for this painting was a daydream. Sometimes I sit and just let thoughts come into my mind. This process often results in a visual experience. I may then start painting the vision that I have in my mind. Usually my mind’s vision is only about two thirds complete. I have to fill in the blanks for the rest of the painting, it is like guesswork to determine what I should add.

The Spinning Space Mind is one of several paintings that I made this way. The problem is that I do not have photographs of some of the art works that I made with this process.  Another painting that I made like this is called Maa  (mother), it depicts creativity in the form of a vagina but unfortunately I do not have a picture of that artwork.

The Spinning Space Mind explodes with colour and swirls like a floating three-dimensional disk. It is a galaxy that was spinning inside my head! As I was working I kept adding geometric decorative swirls to the painting. This helped emphasise circular movement. It is almost as if the swirls are the engines that propel the disk into movement.

Sometimes, when I am in deep meditation, I observe various processes fuelling my mind. I have meditated for more than 40 years. I started with transcendental meditation as taught by Maharishi Mahesh Yogi. Now I practice many different kinds of meditation, mostly learnt in India. For centuries, India has been ground-breaking in the development of spiritualism, yoga, and meditation!

I want to make another remark regarding this very special painting. I mentioned this particular painting in one of my articles on this website that dealt with my art inspirations. This is the painting that I made long before I saw a poster of a very similar symbol in a small place of worship of the ancient animistic religion in the Indian state of Arunachal Pradesh called “Doni Polo”. My painting corresponded 80 % with the poster I saw there. The only difference was that I had taken a few artistic liberties with the central image to make the painting swirl and pop more. This means that I made this painting without knowing anything about this religion and had never seen this poster ever before. It is surprising that many details corresponded with it.

One of the swirls in this painting has small disks with circular grooves that represent the circle of life. The pattern of time cycles and life cycles patterns actually predates Hinduism. This symbolism plays an important role in the traditional jewellery of Arunachal Pradesh. Researchers have written that this type of jewellery is connected to the Doni Polo religion. It is reported as one of the oldest jewellery traditions in the world.

I have observed similar circle of life patterns duplicated in other Indian village jewellery.  I learned all this years later when I was studying and researching the traditional jewellery of the North Eastern states of India.