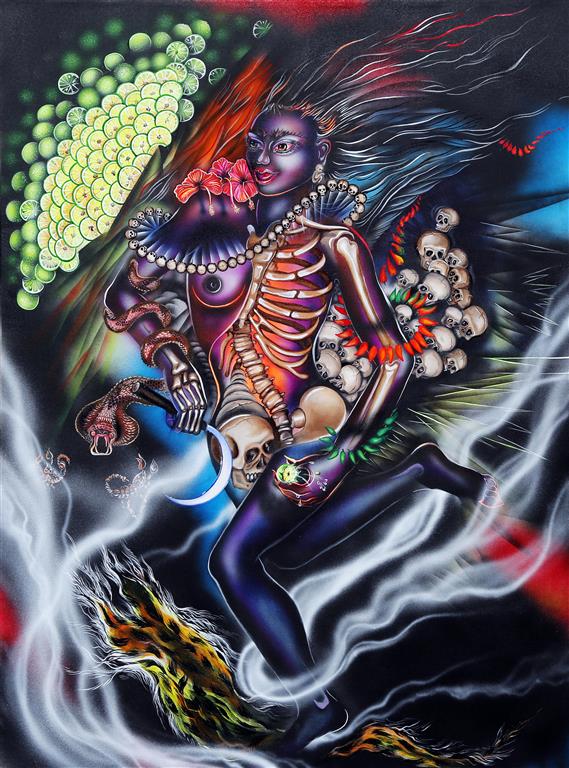 I have a preference for painting female subjects, and powerful ones at that. So how could I resist painting the Goddess Kali? Kali is the quintessential embodiment of “shakti”, female power.

Kali and other early female goddesses symbolise the expression of nature. Like nature, Kali is thought to have a destructive side as well as a benevolent one. Hindu images are mostly about symbolism.  Symbols that represent philosophical concepts pointing to guidelines to achieve inner and outer peace but also to power.

I am very happy with the result of this work because it is so unusual. It says a lot about Kali because of the symbols that surround her. Here, Kali is purple, loud and clear. She represents the reality of life. It is said that she is the one who gives and takes life. She is wild and unpredictable and abhors unreal and egotistical behaviour. She is the mother of letters and words. She does not listen to anyone and will do what and when she feels like doing it.

When she is relaxed she is the Goddess Durga, when she is in a rage she becomes Kali and destroys everything, without a thought. The leopard skin symbolises the God Shiva who is unable to control her when she becomes wild. When you look carefully at the painting you can see that even her eyes and eyebrows have flames.

Kali likes shoe-flowers, lemons, chili peppers, poisonous snakes, scorpions, and fires. Kali dances in the universe and likes partaking  of meat, “charas” (hash), alcohol and blood! Her mouth and tongue are bloody. The painting shows Kali with skulls. As she is the taker of life she has a sickle in her hand.

I  enjoyed making this painting. It made me feel that I am doing my bit to emphasise female power!  l was so excited while I was painting that my brushes (normal brush and airbrush) flew over the canvas and l painted faster than is usual.

As in the painting that I made of the God Vishnu, l used all my techniques, mixing them together to obtain the best results. I used oil paint to paint the skulls and bones because it has a solid and gentle gloss to it that gives a realistic feel. In contrast, the airbrush was used to provide a counterbalance of lightness that is visible in the smoke that floats over the painting. Providing contrast is important in this painting as shown in the use of bright reds, yellows and oranges that spring from purpled blacks.