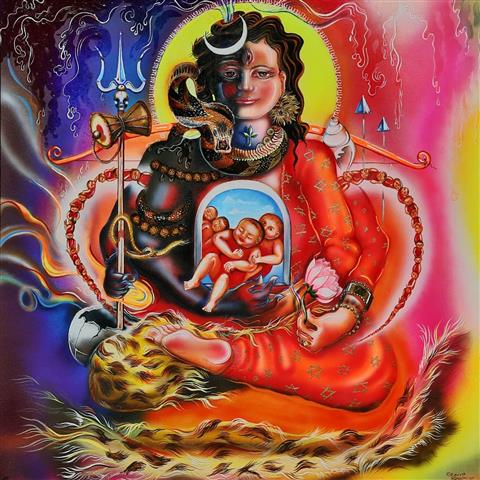 I made this painting especially for the Hemis monastery. I was very inspired when I visited this beautiful monastery which is completely painted with images from the Tibetan Buddhist religion.  One painting in particular really inspired me. It is of  the male and female powers joined together, that is, in the images of Mahakali and Mahakala.

During this visit I had the honour to be introduced  to the leader of the Druk lineage of Buddhist thought, Gyalwang Drukpa.  l requested his Holiness to accept a painting that I made especially for him to be put in the monastery.  His Holiness agreed.

I was very inspired to make this painting because I saw some shared influences of Tibetan Buddhism with Hinduism. After gaining agreement from his Holiness, I started researching an image that I had seen in the monastery and which had a specific similarity with Hindu imagery.

The whole concept was very challenging and difficult to develop in many ways, culturally and philosophically. This painting is full of symbolic imagery. Each element of the painting has a deeper meaning. There is not one single thing that does not have its own story. For example, the  bow and arrow symbolise a steady focussed mind that sends the arrow straight to the target. For this to happen the hand (mind) needs to hold the string very steadily and aim with undistracted focus, similar to what is necessary for meditation.

The conch shell signifies communication between the outer and inner world. Blowing the conch shell also announces that the person blowing it accepts any challenges that lie ahead.

The points of the Trident represent the Trinity of the Gods Shiva, Vishnu, and Brahma. The necklace made of Rudraksh seeds, represents asceticism.  Some believe these to be the tears of the God Shiva. The central eye is a spiritual eye and is said to cause disaster if it is disturbed and opens.

It is important to note that the central image is half male and half female.  What I like about concept is that there is an equal relationship in this spiritual expression in both Hinduism and  Buddhism between man and woman. Shiva represents the ascetic spiritual world and Parvati (Goddess) represents nature, nurture, and the materialistic world. This image is very relevant today because of the clashes between nature, materialism, spiritualism and interference.

Parvati wears gold jewellery because this represents the materialistic world and abundance.  In her hand she holds a lotus that is symbolic in both religions. The lotus represents the concept that beauty can grow in mud. Both religions believe in re-incarnation as indicated in the portal through which babies enter the world again, reincarnated.

This painting works on so many levels that it is quite difficult to  explain all the details. To really understand all of the elements you may need to read a whole book.