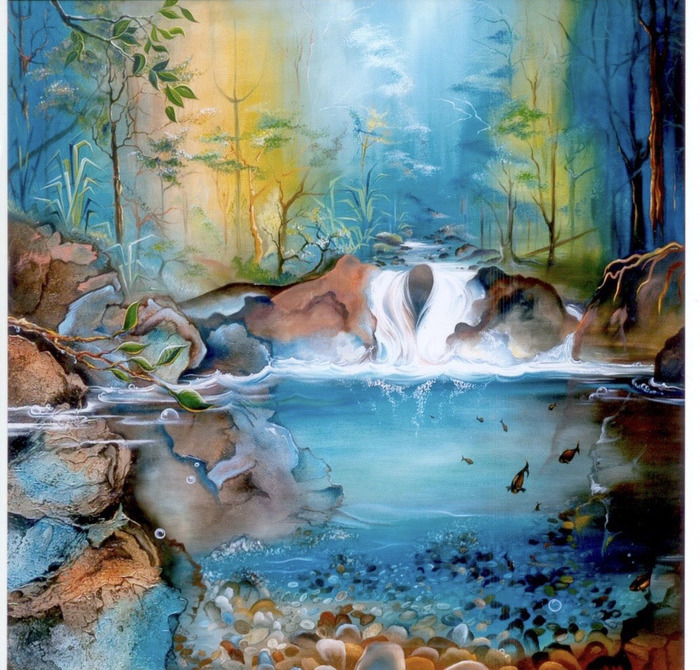 The rainforest in Langkavi Malaysia inspired me to make this painting.  Visiting that rainforest was an incredible experience and very different from what I had expected. Wildlife surrounded the hotel where we stayed.  There were creatures in the trees that we had never seen before. There were large squirrel like monkeys that looked like little bears with big tails.  The most adorable white-faced monkeys knocked on our room windows.  There was also a friendly crocodile like creature of one and a half metres long swimming around in the hotel pool.

We were taken to a rainforest with tall trees and lots of undergrowth, quite similar to what we see in the foothills of the Indian Himalayas. We hiked next to a small winding river in the forest and arrived at a small natural pool under the trees with a small waterfall. It was heavenly swimming there with all the natural sounds of the forest around us. Birds chirped, animals hooted and tooted, the breeze rustled through the leaves. The gurgling river provided the background to these nature sounds. It all felt primal, as if we were living in prehistoric times.  No unnatural sounds disturbed our ears. I felt  that I was part of the universe as I floated around in the water.

A painting appeared clearly in my mind when I arrived back at the hotel and into reality.  The Shiva Linga was going to be the subject. Shiva is an ancient primal God, basically a giver of energy who creates the beginning, the middle and the end of everything. He forges repeated circles of life.

In this painting you can see the small water body where we swam in exactly the way that I experienced it. I did imagine my depiction, basing it on my profound spiritual experience. The small waterfall has a rock in the middle which is called Shiva Linga. The water flowing around it is in the shape of a yoni.  The rock symbolises the male entity (linga) and the water around it is in the shape the female entity (yoni). The big trees with roots all around also symbolise the wild nature of Shiva.

There are some fish swimming in the small pool. At the bottom of the pool there are some black leeches. As I was walking back to the hotel I could see blood running down my legs, though I had no pain. I realised that I had been attacked by leeches for the first time in my life, though it was definitely not the last time.

For this painting I put big splashes of cerulean, white, and emerald oil paint for background of the forest.  Then I dragged my 3 inch brush through all these colours, blending it all easily and quickly. Most of the painting was painted wet on wet, I did not wait for any part to dry. This method creates the dreamlike feeling in this painting. The pool of water can be seen from above and from the bottom at the same time. This is just like what I saw in that pool as I swam with my eyes open above and under the water. The entire painting uses a perspective that focuses on the central rock in the river. It is the focus of everything!