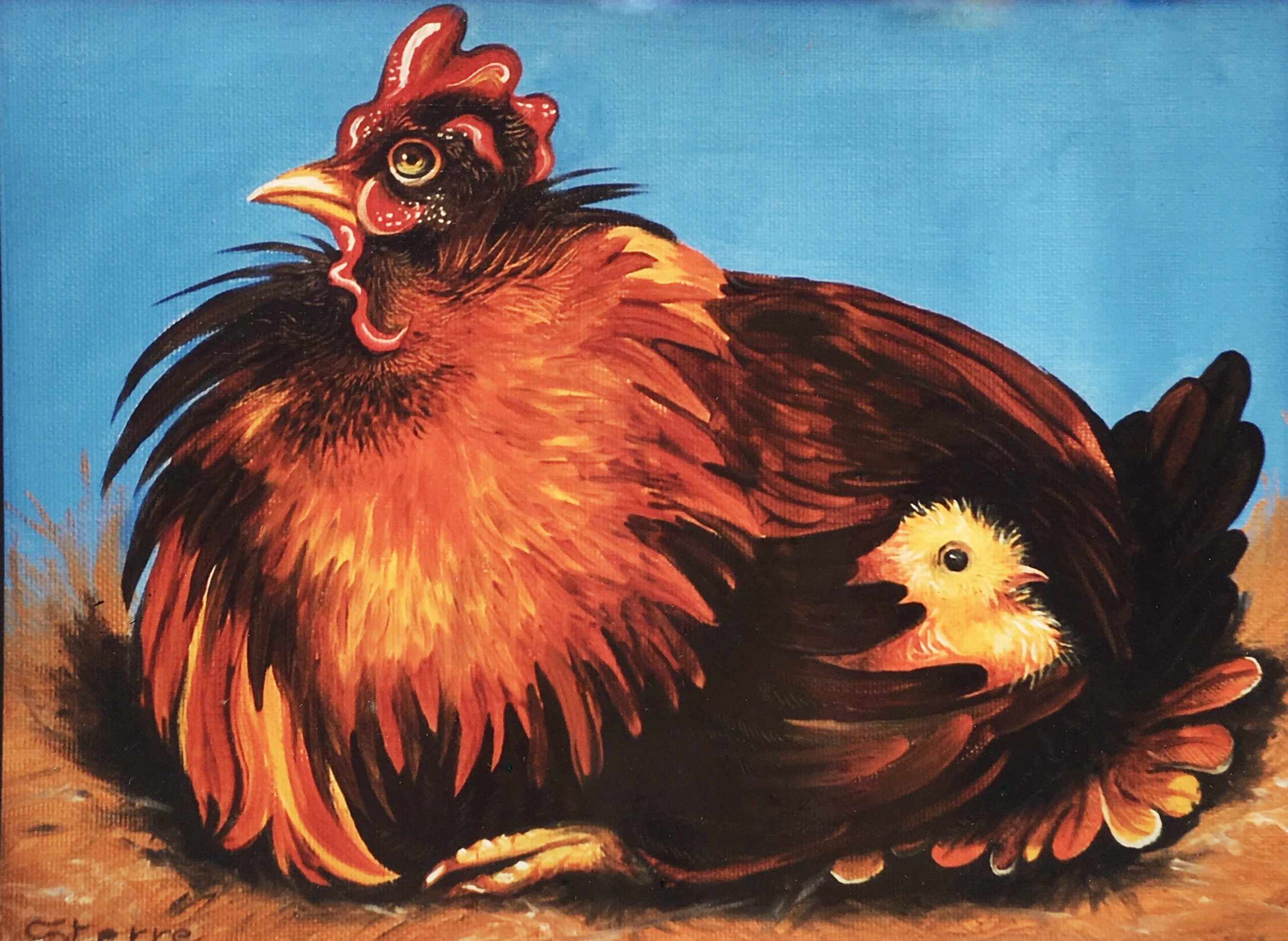 This tiny painting of a mother hen protecting her little chick is based on a real chicken and it was made with lots of love.

There is a story behind this painting.

Usually I go shopping in a very old-fashioned market called I&A in New Delhi. One day, I heard the sound of some very hopeful crowing as I was walking through the part of the market where you can buy live chickens. I searched to see where the sound came from and found the impressively crowing rooster.

Right away I decided  to buy him.  When you buy a chicken or rooster in this market, they normally kill it right there for you to take home.  The butcher refused to give me the rooster though, saying, “ I only sell dead chickens not live ones”. So I had to bargain with the vendor to sell him to me anyway.  The clever man had me pay extra for buying him alive.

The rooster was put in a plastic bag with his head sticking out.  The cooli (porter) put the rooster on top of the basket with groceries. He then carried the basket to the car while I was doing the rest of the shopping.

When I reached the car I asked the cooli “Where is the rooster?” He answered, “Oh I put it in the boot of the car”. My response was, “Are you crazy he’s going to die in the car boot.” The cooli was perplexed but he removed the rooster from the boot and put him next to me on the seat. I then started the long drive home with the rooster by my side.

The next day we made an arrangement for the roster to have his own coop I had to make sure he was protected because I was afraid that the dogs might kill him. There he was all by himself in his little kingdom. He was so cute though that I decided to get some wives for him. He was very happy with his five little women. I enjoyed the fussing of all the chickens.

Next I wanted to add little chicks.

I would often walk anxiously by the chicken enclosure in my garden to see what was happening.  One day I had good luck, there were eggs and I knew baby chicks were going to come. After some time, I spotted our success, there were the little chicks.

To commemorate the occasion I made this wonderful little painting on motherhood.

I observed the rooster, chickens and chicks very carefully and noticed details of their adorable behaviour. I just loved their sweet innocence. They were just like many other families. The daddy acted like a real head of the family with his strutting, swagger, hooting and tooting.

When I was making this painting, I asked myself, what is all this emotional stuff about roosters and chickens of mine all about? I then remembered our neighbours in Belgium when I was small and their fascinating chicken coop. We used to love to visit there.

All at once I decided that I had no reason to eat chicken. It took me some time, but slowly chicken disappeared from my diet. I only eat it now if a host offers it to me when I socialise.