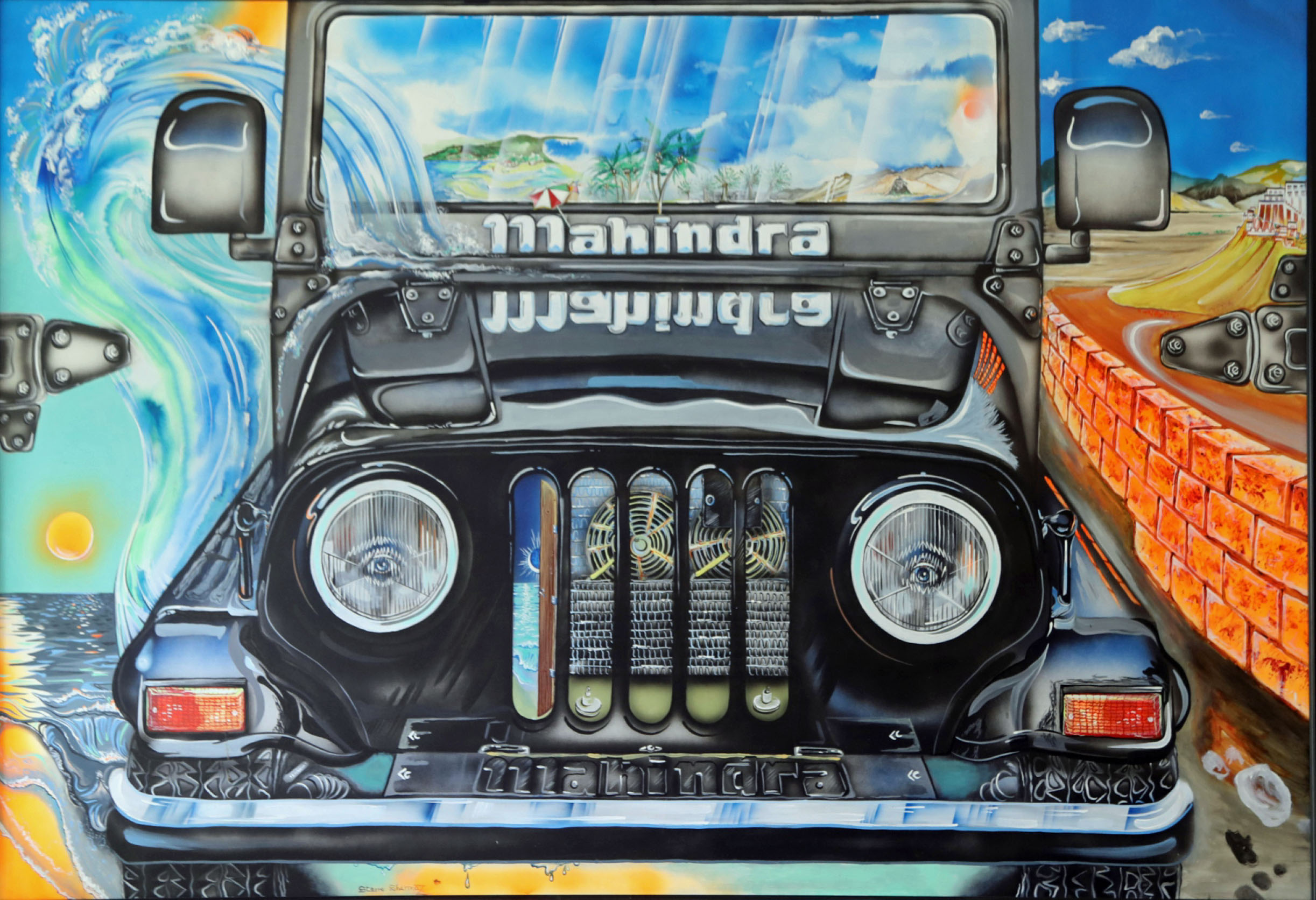 Mahindra (2015), 4.5×6 ft, Italian canvas, acrylic paints, spray paint, light air brush. First exhibited in 2019 at the gallery of the Alliance Française  in New Delhi and then in 2019 at the The Cube Gallery,

“Sun, Sand and the Sea Exhibition” in Moira, Goa.

The jeep that l used to travel far and wide in India inspired this painting.  This jeep drove from Delhi to Ladakh via Kashmir and to Ladakh from Manali and Delhi. The jeep also drove twice to Goa from New Delhi. It took me deep into the Himalayas several times. Those trips were to the state of Uttarakhand to visit the holy site of Gangotri close to the Tibetan border among other locations.

This jeep is a four-wheel-drive that is used a great deal for these types of rough and tough trips in India. Mahindra jeeps are manufactured in India.

I will never forget the adventures and pleasures of these trips. I decided to paint this artwork to commemorate those adventures.

Some of the roads we travelled on were on the edges of steep dangerous and narrow cliffs. Sometimes the roads were seriously potholed and had 10 inch dust layers. In some places they were just wide enough for the chassis of the jeep. We drove on roads that were covered with landslides and were impossible to even see. Sometimes we had a bulldozer in front of the jeep so we could even have a road to drive on. (The authorities keep bulldozers at hand in landslide prone zones.)

On one side of this painting you can see the mountains of Ladakh topped with monasteries. Buddhist chants echo in the valleys from these monasteries.

I used some humour in this painting. Like, for example, the headlights of the jeep have eyes to look out at the world. There is a little umbrella that sits on the bonnet of the car, umbrellas are emblematic of the seaside state of Goa.  A big wave throws itself through the windshield to splash down onto the bonnet. The setting sun of Goa on the left sinks into the sea.

You can see two hinges on both sides of the painting. They signify that this painting opens the doors to adventure. In reality these hinges are the doors of this jeep.

The cliff walls that line the roads in this mountainous Shangri-La are reflected on the body of the car.

Technically, this painting was very difficult to make it because I had to cope with creating lots of symmetry. For that to manifest itself I had to measure each and everything. Not one centimetre more or less on each side should be wrong, otherwise the whole balance of the painting would be off. Making the mirror reflection of the word “Mahindra” was also a challenge. Everything in this painting is in balance, just like the planning of all my adventures. I will definitely get myself another Mahindra Jeep!