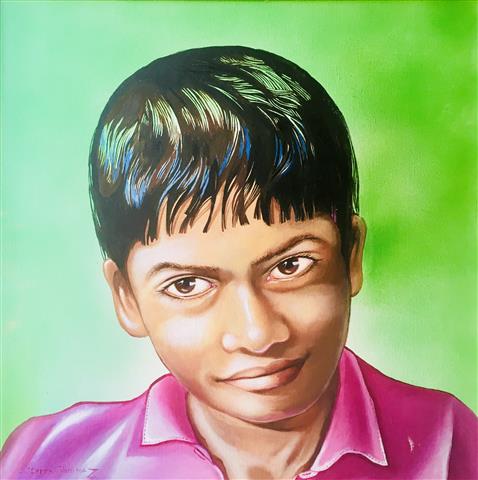 I first saw Mahipal when he was only six years old, a  boy in a dust laden T-shirt and ragged shorts that sagged around his bottom. He was not wearing any shoes. His feet were covered halfway up to the knee in dust.  You could say that he was wearing dust socks.

Mahipal’s parents were building a wall behind our house.  His father was a bricklayer and his mother a labourer who brought mortar to her husband in the large aluminium bowl placed on her head. The boy had a very intelligent look in his eyes.

I asked “does this boy go to school?” and was sad to hear that the answer was negative. I then proceeded to tell the parents about the importance of sending children to school.  The parents replied “we move around a lot and don’t stay anywhere long enough to enroll our son in school“. I replied “well you will have to find a way if you want to have him drive his own car one day and take you out to see beautiful places”. After this conversation I left India for a few weeks’ holiday.  When I came back, I found the same six-year-old boy at our farm. His parents had left him with our household worker, who had promised she would educate him.  Our household worker felt that he could be a companion to her only child who was two years younger. Mahipal ended up being educated in a very good local English medium school for many years. He now has a job and earns his own keep at the age of 19. His parents are also doing very well now because bricklayers are now paid much better in 2020.  They have their own home not far away from where we live.

This painting was made when Mahipal was around 12 and the expression on his face reflects his willpower and grit.

The background was painted green, representing the greenery all around him on the farm where he grew up. I used oil paint for his face. I started to use acrylic and oil together at the time this painting was made and used acrylic for the background and oil for the foreground. I use this method more and more frequently as time went by.