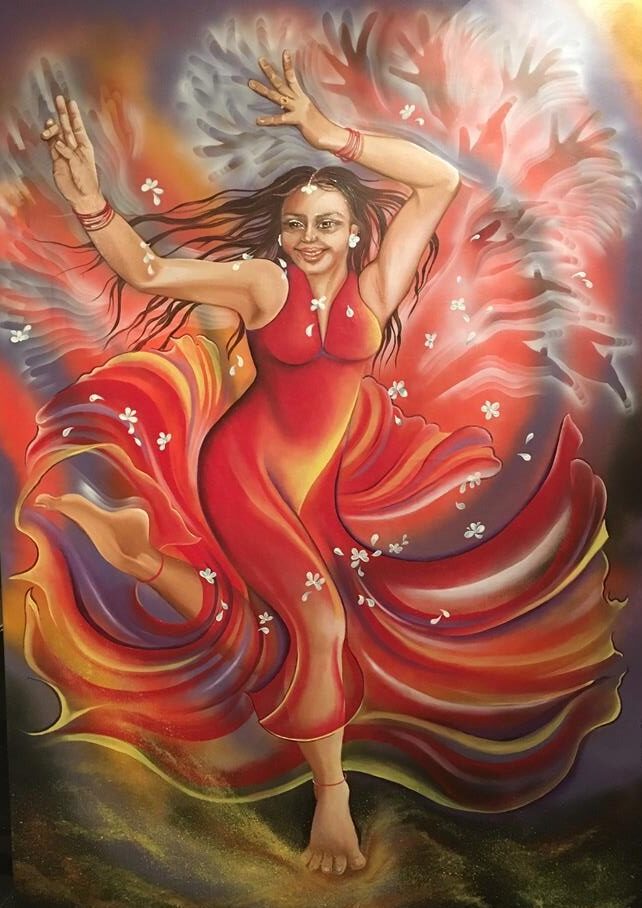 Kavita Soni, Odissi dancer,  inspired this painting. I got the idea after I had asked her to do a simple demonstration of the different gestures that are used in classical Odissi dance. Kavita was wearing very simple clothes as per my request because I wanted to clearly see her movements.

I initially observed Kavita for a painting that I was planning that was to be called ‘Soni’.  When I finished that painting I felt I that I still had more inspiration to paint her. The Dancing Goddess painting is the result. There might even be more paintings in the pipeline.

I have often observed performing artists transform themselves into completely different entities when they are on the stage.  It is almost as if nothing of their original selves remains. They become so  completely different that sometimes I cannot even recognise them. This is what happened when Kavita Soni did her demonstrations for me. Kavita looks very different in this painting because I was still experimenting with her face (just like she does). It is just a moment of an inspired entity.

Look at her movements, they are so fluid.  I expressed this in the white shadow movements of her hands as well as those of her feet.  The flying sand is a movement frozen in time. I also communicated the movement of the Goddess’s body in the fluid flying folds of her red dress. The dress is red, signifying that this Goddess is married.

The small floating white flowers belong to this Goddess and add to the feel of  distance in perspective and size.  To increase the feeling of contrast and texture, I played with large monotone areas that contrast with very small details such as the flowers and flying sand.

I tried to present the viewer with my version of a  modern Parvati Goddess unencumbered with unnecessary decoration, full of the real spirit and true freedom of womankind.