Protection of the Girl Child, 2000 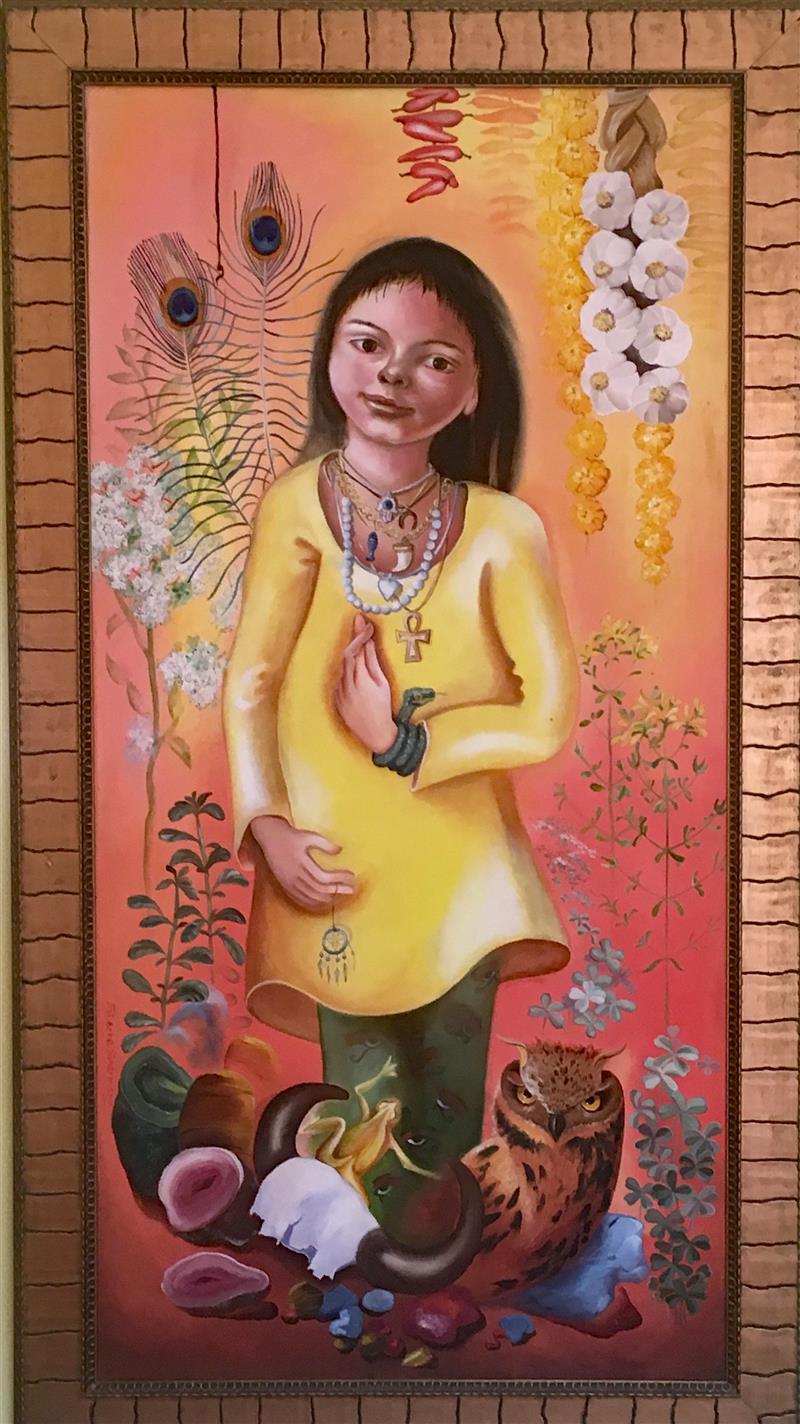 The different methods that Indian culture had developed to prevent the “evil eye” from giving anyone had-luck  fascinated me from the time when I first came to India in the early 1970s. Sometimes I found lemons, chilies, banana leaves, or coconut pieces on the road in my neighbourhood. These would be arranged in a very specific way on the ground.

Such displays are related to very ancient rituals like voodoo (Tantra).My sister-in-law told me that that someone with bad luck had put these things on the road. The belief is that the bad luck jumpson to whoever is the first to walk by the display and leave from person who had put out the items.

At the time when I made this painting I had founded and managed a school with lots of girls  for several years as part of my social work. These children were the first generation to obtain any education. As I looked at their innocent faces, I knew that some of my students were being abused. This knowledge touched me deeply. UNICEF had sponsored research that had recently been published and which claimed that a large number of Indian children are subject to sex abuse. As part of our social work, we then commenced some special classes on the subject and created awareness with the teachers.

I painted this artwork because I also read a great deal about these and other misfortunes befalling young girls all over the world. I  felt very frustrated at the evil perpetuated on these girls.  So, in addition to doing my social work, I decided to do something else about it. I painted a young girl surrounded by traditional things that are believed to ward off the evil eye from all over the world.

The things that I painted in this work of art are all symbols of protection.The  Egyptians used to draw an eye to ward off evil. In in certain European countries, garlic was put on display in the house. In some parts of the world an owl is believed to have protective qualities. I spent a great deal of time researching these beliefs so that I could be accurate. I wanted to make sure that I had painted all the correct protection rituals. Note that the girl’s hands are disproportionately large to protect herself. The viewer is welcome to discover for themselves what the other meanings of all the different symbols that I used in the painting are.
The painting has been painted in very warm colours, the girl’s face is very open and fearless. After all,charms from all over the world are protecting her. Not only those that are currently used, also those used thousands of years ago!