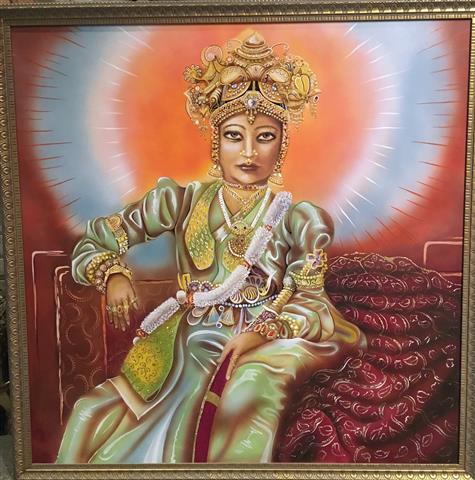 The painting is currently displayed in a hotel in Los Angeles in the United States.

The subject of this painting is Rani of Jhansi, an iconic figure in Indian history who is well known for her bravery during the first war of independence against the British in 1857. She was a commoner who married the king of Jhansi at a young age. When the king died, the British politics of reducing the finances of Indian royalty affected her too as they denied her the monies due to her.

This  painting was made based on what is said to be the only known photograph of her. When I saw the photograph I was inspired. While representing the details exactly as in the photograph, I decided to paint her with another expression, one that conveyed a look that said, “do not mess with me”.

In my painting, I have represented the Rani’s garments and crown just like in the photograph. Notice that she has a long sword in a red velvet sheath lying on her lap!

This beautiful Queen met a very sad end when she fought and refused to concede to the British during the first war of Indian independence in 1857.  There are various stories about the way she died. One claims that she was being pursued by the British and then jumped off a cliff with her loyal horse. The other story is that, when she was injured and had fallen down, she tried to shoot a British soldier who instead shot her dead.

Many of my paintings have feminine subject matter since I feel not enough justice has been given to women and their contribution to this world. I seldom paint male subject matter.  In my life I also surround myself more with women. Aside from my male family members, those closest to me have been women.  My paintings reflect this. As I get older, my tendency to prefer women in my art has increased. This painting was painted very quickly. I was fascinated and emotionally involved. The beautiful colours just flowed from my airbrush.  The original photograph was very granular and in brown and white.  A long time ago, black and white photographs were coloured with old fashioned airbrushes.  l used the same method to make this painting, colouring in the image with faded pastels like they did during the earliest photography period.