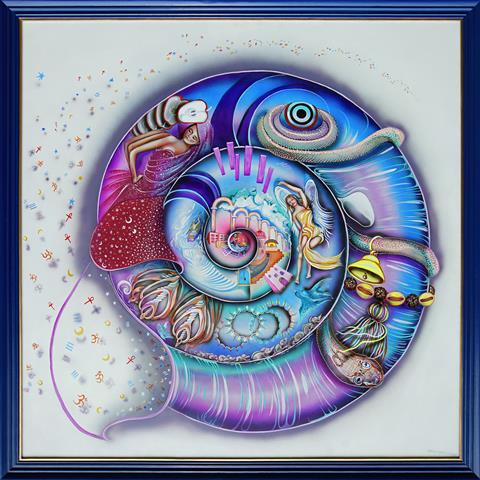 There is so much to say about this particular painting that I do not know where to begin. I have been very interested in spiritualism from the time when I was a bored church going little girl who was trying to find something interesting to think about. That was when my mind first started taking free flight into true spiritualism. My thoughts did not have much to do with the process going on in front of me.  I have found that boredom and spare time are very important to me because, without these, my imagination cannot take flight.

In this painting the red thread of spiritualism ties many elements together. There are angels, animist notions, Hindu symbols, Buddhist colours, sacred letters and symbols of different religions. I will give just a few examples of all the concepts that turn this painting into one spiritual whole.

Clearly, the largest element of all is the shell.  In the Hindu religion, the source of spiritualism makes its home in the shell. This shell is called a shank (conch shell), and is believed to connect to the spiritual world.

There is a spiral inside the shell. The details of the spiral can be seen in the small slices of shells on the left hand side of the painting.

It is important to blow the shank at the start of meditative prayers. Our breath travels through the spirals when we blow it, making a trumpeting sound.  With this action we connect our awareness of the breath to our inner self. The spirals also work in reverse and bring energy into us. This energy connects us with the life force of the universe.

At the bottom of the painting are four circular portals to enter the different realms of our mind.

In the centre of the painting is a tiny boat with two heavenly beings who manually use energy to propel themselves on the water to save those who are overwhelmed with what is happening to them.

Throughout the layers of the large shell, you can see the arches of temples, churches, huts, and modern multi story buildings (just like the different levels of the shell).

A line of rats run in the circle, they are worshipped as versatile and multiplayers.

The snake is representative of the God Shiva and poison, powerful matter of the universe. The target is meant to indicate the single minded focus on peace. The tassels around the trunk have the Buddhist colours of different goddesses.

Notice the bells, they ring in different houses of the heavenly powers. They even ring in the open air of animism. The apples are animist symbols of fertility. Symbols of different religions emerge out of the mouth of the shell:  stars, moons, the symbol Ohm, 3 lines, and crosses.

In this painting, the coming together of spiritual concepts brings about wholeness in thought and spirit.