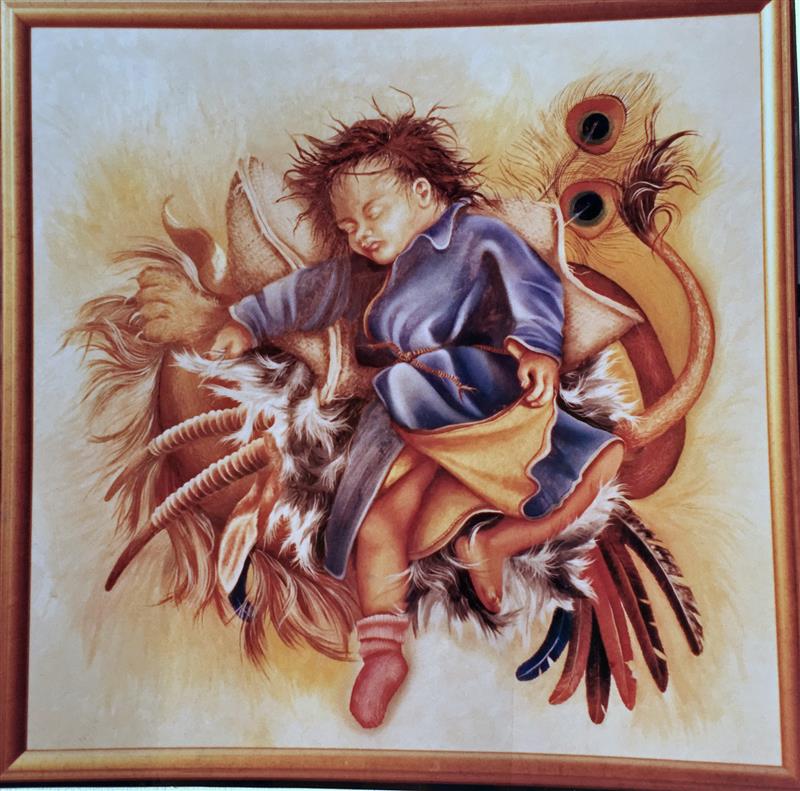 This is the only photograph I have of this painting. It is possible that now, with the passing of so many years, the white will not be as crisp as when I painted it. The white was meant to represent snow and cold. I also made it that way because I wanted to avoid a distracting busy background and emphasise the child in the foreground.

I had seen the child as he slept peacefully on a heap of rags on the street. I was inspired to make a painting that would imagine this child’s future, one in which he would be successful and brave!  If you look carefully, you can see the horns of a wild antelope and a pair of lion paws among the clothing. The antelope is a symbol of elegance, high energy, communication and wisdom.[1] People born under this totem are very intelligent and use their knowledge to advance in life. The lion represents strength and courage.

The child’s hair is uncombed and wild because he is not a shiny polished child. I did notice that the mother had tried to take really good care of the child. He has a sock and a booty on one foot and on the other foot he has no footwear. He is a wild child with one foot in the material world and one foot in the wild world. He represents the truth and reality of true nature.

Sometimes I cannot believe how some of the paintings really speak to a viewer in a particular way, as if it were made especially for them.

The lady who has the painting has passed childbearing age. She told me some years ago that she loves this painting, and this child in particular. She loves horseback riding in the forest and racing, galloping trough meadows.

I am sometimes quite surprised at the ideas that I get when I look at a scene that inspires me.

I do wonder what happened to the boy, he must be a mature man now…